If you’re not a soccer fan you might not know that during these weeks the European Soccer Championship 2016 is held. And normally, here in the Netherlands, you wouldn’t be able to drive through a street without seeing orange decorations. But this time it’s different, the Dutch team didn’t qualify. So lots of people are watching the championship wondering which team to support. I must say that it’s kind of relaxed not having to deal with the excitement and frustration of the Dutch team participating.
This time France is the host of the championship. And what is the one of most iconic structures in the world and best known symbol of France? Right, it’s the Eiffel Tower. And I thought it was more than fitting, during this championship, to show you an upcycle design that is all about this fabulous structure.

Tribute to the Eiffel Tower

I’m talking about a nothing less than stunning chandelier called Colosseum. The lamp is a creation made by independent Dutch designer J.P. Meulendijks for his label Plankton. He took a look at a miniature Eiffel Tower and figured out a way to attach many towers to each other. And by doing this he was able to create a construction that has a very impressive final form. The structure is very detailed and creates stunning shadows playing on its surroundings. A fun aspect is the way it refers to another iconic structure, the Colosseum in Rome | Italy.


What I really like about it is that you have to take a closer look to see what the design is actually made of. The chandelier is already a real eye-catcher, but after seeing all those small towers it’s only even more amazing. All in all a very nice tribute to the Eiffel Tower. The chandelier is made entirely out of coated steel with a white matte finish. The lamp is 85 cm in height and 47 cm in diameter.

J.P. Meulendijks designs furniture, lightning, and other interior products for various international clients. Designs are made from concept till production-ready technical drawings, and in some cases end-products. His work is often published and exhibited. Some designs are awarded, others part of a museum-collection. In 2010 he started to focus on environment, ecologic design and sustainability. After a long research he developed a new biodegradable material ‘Ecolotek’. Together with new designs and a new mission this resulted in a new label called PLANKTON.

“I like to describe my work as fresh, soulfull, minimal, with a slice of humor, designed by my own way of thinking, brought back to the essence of the idea. I like to use iconic and archetype images, forms and objects, which everybody will recognize, which I will interpret and use in a different way. I try to put a little poetry and soul into a object. The idea usually defines the design of the product.”

Back to the championship. During this event a Dutch public radio and television organization has a tv-show every evening called NOS studio France. Before, during and after the game a changing group of guests discuss the championship in the studio. And guess what, there’s a stunning object hanging in mid-air. Yes, it’s the Colosseum chandelier. They couldn’t have chosen a more appropriate upcycle design lamp.

Okay, most of the upcycle items that I post on my blog are about lighting. I’ve always loved light, reflection and the design of...

HABITATELIER: A place to find vintage products that express character

AYO: Add Your Own upcycle design lamp by Ryan Frank

Upcycled Wall Lamps out of kitchenware by Lampified 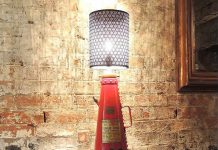 Multifunctional coffee table with storage made from used pallets