Not sure about you, but some objects appeal to me more than others. There are objects that are interesting just looking at them. And such an object is a fan guard. They come in different shapes and sizes.

I’ve always liked those ceiling fans. They have a nostalgic touch to them. They’ve stood the test of time. These ventilators originated in the early 1860s and 1870s in the United States. Those first rotating ceiling fans didn’t have an electric motor but were powered by a turbine and a stream of running water. These systems were able to serve several fan units. According to WikiPedia the first electric ceiling ventilator was invented by Philip Diehl in 1882.

In 1909 in Japan, the company KDK, part of today’s Panasonic Corporation, invented a way to mass-produce electric fans for home use. Later on in the 1940s, India became the world’s largest manufacturer of electric ceiling fans. Those were mainly sold mainly in India, Asia, and the Middle East. And in the 1950s they started producing stand and table fans.

So here we are, fast forward more then half a century and those fans are still sold. Of course newer, better and restyled. But still the same concept.

One type of fan that inspires upcycle designers is a table fan with a protective cage or fan guard. These guards are made out of metal rods. When you look at these cage it’s almost a design object by itself.

Regular visitors of upcycleDZINE will know that I’ve written several posts about these type of fans. Have a look at Stool Zero by KaCaMa, Lamp Fan by Fantasized or Dual Fan Lamps by T.O.M.T.™. All beautiful upcycle design pieces.

He took a different look at a fan guard and thought it resembled some sort of box. Looking at the volume and the constructive system, it isn’t strange to see it as a space to store things. Some sort of container.

Because of the open structure of the fan guard, you’re able to see what’s in it. And that’s quite a fun and functional aspect of these VETA tables.

VETA comes in several models. There’s a side table version with a lid to support objects. A second one has an iron mesh dish that fits in the top opening of the guard. This way it can be used as a dish or bowl to put or display things. And the third version has two guards on top of each other. This way it’s a double box to store things in.

The thing that I really like about VETA is the fact that it’s a multifunctional table. You can use it as a side table or as an object to showcase items or to store stuff in. Whatever you choose, this upcycle design side table will be a nice addition to a room.

Looking at these photos you might think that I don't like books. Wrong, I love them. Reading, holding and yes, smelling old books is... 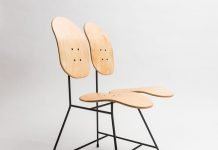 Furniture out of Railroad components by Rail Yard Studios